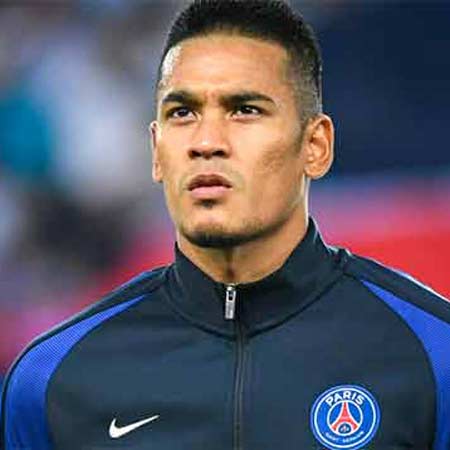 International Franch footballer, Alphonse Areola is playing as a goalkeeper for Ligue 1 club Paris Saint-Germain since 2010. He also played on load for clubs like Bastia, Villareal, and Lens before returning to PSG. Areola also represented France at every youth level and was part of the France U20 side that won the FIFA U-20 World Cup in 2013. He has been listed in the 23 man squad to represent his country in the 2018 FIFA World Cup to be held in Russia.

Alphonse Areola was born on 27th February 1993 in Paris, France under Pisces birth sign. He belongs to Afro-European ethnicity and holds French nationality. She also has a sister, Gratia Claire Areola however the information regarding her parents are missing.

Since his childhood, Areola started playing football along with his friends and now he is one of the most impressive goalkeepers for Ligue 1 club Paris Saint-Germain.

Alphonse Areola began playing football at a young age of six for Entente Sportive des Petits Anges.  He spent seven years at his local club before signing for the Ligue 1 side, Paris Saint-Germain playing for U17 and U19.

On 18 May 2013, Areola made his senior debut for PSG in the 3-1 match against Brest, replacing first-choice goalkeeper Salvatore Sirigu. He made his first start for the club in a 3–1 win against Lorient, playing 61 minutes.

On 23 July 2013, Areola was loaned to Ligue 2 side RC Lens, made 36 appearances for the campaign who were managed by former PSG manager Antoine Kombouare for the 2013–14 Ligue 1 season. He also won the “Ligue 2 Goalkeeper of the Year award” and the spot in the Team of the Season.

On July 26, 2014, he was transferred on loan to Bastia as a replacement for the retired Mickaël Landreau. On 9 August 2014, Areola made his debut for Bastia in a 3-3 draw with Marseille. 7 June 2015. Overall he made 39 appearances for the club with 13 clean sheets. He also represented the club in the finals against his parent club PSG in the Coupe de la Ligue which they loss 4-0.

On June 17, 2015, Villareal signed Areola for a season-long loan replacing their regular keeper Sergio Asenjo. He debuted for the club on an opening match of the season against Real Betis in a 1-1 draw. He set a new record, 620 minutes of football played without conceding any goal, breaking a previous record of 615 minutes set by Diego López.

Areola has played for France at all Youth Levels. He represented France team at all youth levels from under-16 to under-21 between 2008 to 2014 season.

He is also qualified to play with the Philippine senior team due to his parents being both of Filipino heritage. In 2011, Areola was personally invited by team manager Dan Palami to consider playing for the national team.  He was also the part of a France Under-20 that won the FIFA World Cup Under-20 in 2013.

On 1st October 2015, Areola earned his first call-up against Denmark and Armenia as a part of the France team. He is also listed in France's 28 man squad for the FIFA World Cup 2018.

Alphonse Areola has earned huge fame from his professional career as a footballer. His current market value is $11.78 million. As of 2019, Areola’s has an estimated net worth of around $3.53 million. Apart from football, he also added some value to his net worth through endorsement deals.

The star goalkeeper, Areola is signed to Ligue 1 club Paris Saint-Germain where he receives weekly $47,122 as salary and earns $2.4 million as his annual salary.  He also enjoyed loan spells with several clubs including Bastia, Villarreal, and Lens.

Alphonse Areola is married to his longtime girlfriend-turned-wife, Marrion Areola who is of Filipino and Lebanese origin. The couple tied the knot on 26th December 2016.

The family of four currently living a very happy life without any bad rumors of separation and divorce. Areola loves to play football and also likes to sing. His favorite footballer is Ronaldinho.

Below is an interview of Alphonse Areola.