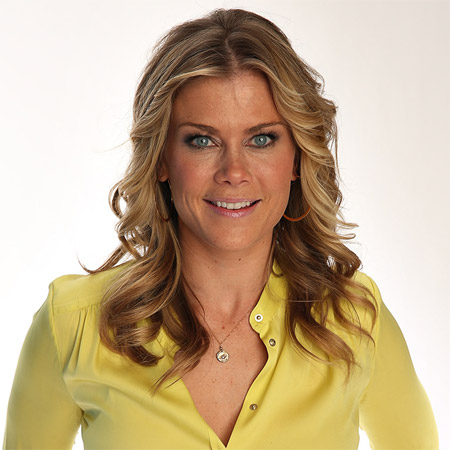 Alison Sweeney was born on the 19th of May in 1976 in Los Angelos, California in the U.S.A. She is the only daughter of her parents. She has two siblings; one younger brother and one elder brother. Her mother was a violinist and her father was a businessman. Alison Sweeney is American Citizen with Caucasian Ethnicity.

As she grew up in a  musical environment she tried going to make Violin her career until she realized she had more dedication to acting rather than music.

She attended Polytechnic School in Pasadena, California and later she took business classes after her work as UCLA undergraduate.

Sweeney made debut in media at the age of 5 through Kodak advertisement. Sweeney’s role of Samantha “Sami” in Days of Our Lives took her to a different height in the field of media.

She showed up at a game show Fear Factor. Apart from these, she has been depicted in some very popular series of all time Friends and Las Vegas.

She has also held the responsibility of co-host in a live television broadcast. She hosted The Biggest Loser from 2007 to 2015. In 2017, she appeared in the TV movie Murder, She Baked: Just Desserts.

Alison Sweeney’s net worth is $9 million at present. She had a net worth of $7 million in the past. She takes $45 thousand per episode. She has earned a huge amount of salary from her career. She helped raise more than $61 million dollars for the MDA cause during the telethon.

She currently resides in Hollywood Hills West, CA where she owns a lavish home of  $1.7 million.

Sweeney stands at the height of 5’4” (1.62m). Sweeney has not only proved herself as a smart mother but also has ruled the heart of fans after successfully hosting “Biggest Loser”. Her perfect body and cute smile have made many her crazy fans and her dedication to her work is definitely taking her to more success in coming future.

Sweeney is a married woman. She is married to Dave Sanov, a Los Angelos Highway Patrol Officer, since 2000. Sweeney and Sanov got married on 8 July 2000. The couple has been happily living together without any divorce rumors.

They also have two children together.  She welcomed a son Benjamin in 2005 as her first child and she gave a birth to their second child, a daughter in 2009.