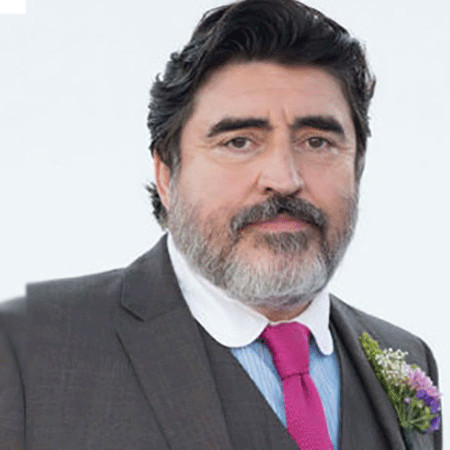 Alfredo “Alfred” Molina is an American/British actor who is recognized best for his role as Doctor Octopus in the movie Spider-Man. He is also known for his acting in the movies The Da Vinci Code, Rango, Prince of Persia: The Sands of Time and many other.

Born on 24th May 1953 to parents Giovanna and Esteban Molina in Paddington, London, Alfred Marlon, has a mixed ethnicity and is a British national. However, on 2004, he announced that he had become a U.S. citizen. Alfred Marlon’s mother was an Italian housekeeper in a hotel and also a cook. His father was a Spanish immigrant who worked as a waiter and chauffeur.

Alfred Molina developed the will to become an actor after seeing the movie Spartacus when he was 9 years old. Therefore, following his dreams, he attended Guildhall School of Music and Drama. Later he got accepted in National Youth Theater after pa s sing the audition.

After joining in the National Youth Theater, Alfred  Marlon started performing on stage. His two major stage performances are “The Night of the Iguana” as Shannon and “Speed the Plow” as Fox. And the splendid performance in “Art” which was his Broadway debut gave him a Tony Award nomination in 1998.

Alfred Marlon made his film debut in 1981 from the movie Raiders of the Lost Ark. There is a long list of movies where he has acted. He has been nominated many times for his acting and has won several of the awards. Not just movies and stage, he can also be seen on the television screen. He is basically seen in the villain roles for which he commented: “When you’re kind of my size and look the way I do, leading man romantic leads aren’t going to come your way.”

Alfred Marlon has been nominated for several of the awards for the movie Frida, Spider-Man 2, An Education and many other. He has also won several of the Awards for his work. He was paid $2500/week in the movie Raiders of the Lost Ark in 1981 and $3,000,000 for Spider-Man 2. This sums up his increasing salary and has the net worth of $8 million.

Alfred Marlon is a married man. He is married to an actress Jill Gascoine. She is 16 years older than Alfred. The couple got married in 1986 in Tower Hamlets, London. Alfred has a daughter, Rachel Molina born on 1980, who is a London-based photographer, from his previous relationship. He has two stepsons named Adam and Sean from his wife’s first marriage.

Alfred  Marlon and Jill Gascoine have shared a sweet love and became an example to the people. Their love life is still praised by many of the people who know about them. The blessed couple has also been grandparents to two adorable granddaughters Alfie and Layla. His wife Jill Gascoine is suffering from dementia. The family is living in Los Angeles, California.

Alfred  Marlon is present on Twitter as @OfficialMolina. He is a regular user of Twitter. He has been present on Twitter since December 2013 and has 9,915 followers. Besides, the sites including Wikipedia, IMDb, Rotten Tomatoes and many other internet sites has stored short biography and news on him which helps to know more about him.