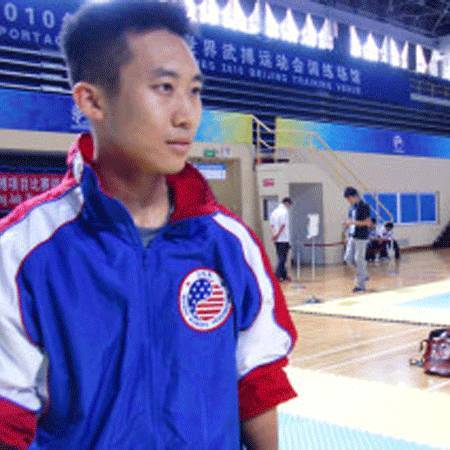 Alfred Hsing is a popular name for the martial arts fans. Thirty three years old Alfred Hsing is an American martial artist, actor and stuntman. He is the first American national to win gold in Wushu for America. He is also known as an expert Shaolin Expert on Deadliest Warrior of Spike’s TV.

There is no information on his parents but Alfred Hsing is of Chinese descent though has an American nationality. He was born on November 23, 1983, in San Jose, California. He has completed his education in the United States and graduated from UCLA (University of California, LA) with a degree in Economics, Computer Specialization and minor in East Asian Languages. He was fond of martial arts since his childhood and started playing martial arts since he was very young.

Having been the avid lover of martial arts, Alfred Hsing started playing martial arts since he has a kid. He used to play fight with his brother. He started the formal training in Shaolin Kung Fu and Wushi since he was 15 years old. Soon after learning wushu, he became the first US male athlete to win 2000 Martial Arts World Cup Grand Champion.

Alfred Hsing has won several of the Martial art competitions including Gold at the 2005 Us Wushu Nationals, 2007 US Wushu C Team, 2009 US Wushu A-Team and more. He has learned several styles of martial arts throughout his training. He is proficient in the drunken fist, drunken sword, whi chain, t’ai chi, t’ai chi sword, emei daggers, fan, staff and broadsword. Kung Fu Magazine and Masters Magazine has featured him for his significant accomplishments in martial arts.

Being a graduate in Economics and Computer Specializations, Alfred Hsing began to work at Big 4 accounting firm and later moved to City National Bank. In 2009, he had to quit his job to train for World Wushu Championship. After winning the title, he did not go back to the job but started focusing on acting, stunt work and teaching martial arts. As an actor, he has appeared in TV shows and films like CSI: NY, Deadliest Warrior and Bollywood movie Aakhari Decision. He flew to China after receiving Jet Li’s offer to work on Jet Li’s movies The Sorcerer and the White Snake and Tsui Hark’s Flying Swords of Dragon Gate.  After earning a

Alfred Hsing flew to China after receiving Jet Li’s offer to work on Jet Li’s movies The Sorcerer and the White Snake and Tsui Hark’s Flying Swords of Dragon Gate.  After earning a degree in acting at Beijing Film Academy, he has worked with several popular personalities of martial arts including Jackie Chan.

Alfred Hsing is happy and satisfied on what he is involved. He earns a good salary. His current net worth is not known however it can be assumed to be high.

He is a very secretive person. He likes to keep his private life out of media. Therefore, he has made his clean image giving no chance for any controversial or rumor news to arise.

World Whushu Champion, Alfred is adored and respected by numbers of Martial Artists. He is an icon for Wushu. He is not very active in social media but has Facebook and Twitter accounts where a considerable number of people has followed him. A short biography and news on him can be fetched from different internet sites.