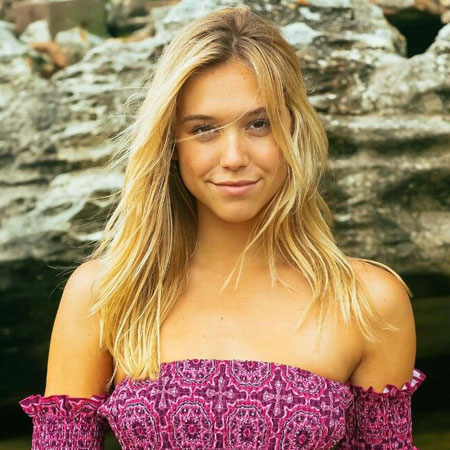 The 22 years old Alexis Ren is one of the most popular teenage Instagram models. She is best known for her glamorous shots and her social media-perfect life. As of 2019, the social media iconic has over 13.1 million followers. She has also self-titled a YouTube channel with over 799 K subscribers.

Alexis Ren was born on November 23, 1996, in Santa Monica, California, United States of America. Regarding her ethnicity, she is of German and Russian descent. She holds an American nationality. Ren is the daughter of Cynthia Gaylord and Frank Gaylord.

Alexis Ren's mother was a health nutritionist and her father is a lawyer. She is the middle child of 5 kids who has two older sisters, one younger sister, and a brother (Amber, Alisa, Devin, and Ace). Unfortunately, her mother passed away at the beginning of 2014.

The renowned Instagram superstar Alexis Ren first began her modeling career at the age of 13 for Brandy Melville. After that, she was signed by Nous Model management when she was 14. Shortly after, Ren appeared for an ad for Seventeen Magazine.

Alexis Ren at the tender age of sixteen did a Tumblr photoshoot which gave her huge recognition and established her as an internet superstar. After that shoot, she appeared in C-heads magazine in April 2013. The same year, she also appeared in Nextdoormodel magazine.

Likewise, Alexis Ren made her appearance in the swim campaign for Hurly in the summer of 2014. Moreover, she has appeared in the Penta Water Campaign in July 2014. Ren kept her first step for Sahara Ray Swim in Los Angeles in August 2014.

Alexis Ren was approached by Chic Management in Australia and made a deal in October 2014. In 2015, Rem also appeared in Surfing Magazine. More than that, she worked for some popular brands such as Soraya Swim, Forever 21, Puma, Calvin Klein, Gooseberry Intimates, boost, Nasty Gal, and more.

Social media superstars Alexis Ren and her boyfriend Jay Alvarez began their affair in 2014. The couple was first seen in internet fame in 2015 when their impeccably filtered lives and exotic far-away vacations appeared on Instagram and YouTube.

Alexis Ren also traveled the world with her boyfriend Jay Alvarez. The couple seemed perfect and happy. Unfortunately, reports came to highlight a few months ago that the relationship was beginning to get rocky.

Eventually, Alexis Ren officially revealed the breakup on Twitter. During the break-up, she even took to her Twitter to blast the character of her ex-boyfriend's manhood on social media and he was quickly criticized for that.

Apart from modeling, Alexis Ren also loves guitar, drawing, and dancing. Actually, she has been taking training as a ballet dancer for 10 years. Further to add she has also three tattoos on her body, all of which is related to her mother.

Moreover, Alexis is an animal lover and has cats and dogs. Currently, she resides in Los Angeles.

As a rising star, Alexis Ren has an estimated net worth of around $2 million. Her income is reported to be $300,000 per annum.

The major source of income of Ren is yer Instagram account and YouTube Channel. She has over 13.1 million Instagram followers as of 2019. And it plays a major role to boost up her net worth as she can command over $15 K a promotional post.