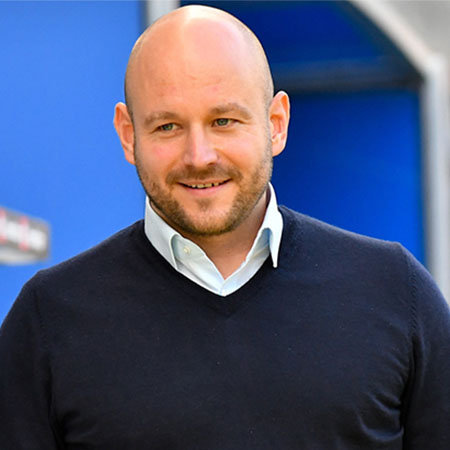 A German former football player Alexander Rosen is currently serving as the Director Football at Bundesliga side TSG 1899 Hoffenheim. Born on April 10, 1979, thirty-seven years old, Alexander used to play from the position of midfielder from the different clubs and in the U-21 German national team. He announced his retirement from the career as a football player in December 2010.

Born in Augsburg, West Germany, Alexander Rosen has been reluctant to give his personal information out to media. He is the grandson of Gerhard Niklasch, who was also a football player. He served as the team captain and record appearance maker at BC Augsburg in Oberliga Sud. Alexander was inspired by his grandfather and was interested in playing football as he grew.  No information is available on his education.

Moving onto his relationship status, Alexander Rosen is a married man. He married his girlfriend whom he dated for a long time. The couple is so in love with each other. The couple is blessed with a son. The family is living happily together in Germany. There is no any sign of misunderstanding or fidelity in between this couple so there has been no speculation for divorce.

Alexander Rosen stepped into professional football playing with FC Augsburg in 1997. Prior to making his debut, Alexander Rosen played in the team of SV Mering, SC Furstenfeldbruck. After a year of his debut from FC Augsburg, he moved to professional league level Bundesliga being with Eintracht Frankfurt. While at Frankfurt, Alexander was loaned to FC Augsburg and VfL Osnabruck. He played for 1.FC Saarbrucken from 2002-2004 and SV Elversberg for 2004/2005 season.

In 2005, Alexander moved to Norwegian football club Follo FK, where he served as an assistant for the club management beside being a midfielder. After spending two years at Follo, he moved to Stuttgarter Kickers, a traditional club in the Regionalliga Sud. After failing to qualify for the higher league, Alexander Rosen switched to TSG 1899 Hoffenheim II where he ended his player career in December 2010.

While he was still a player, Alexander Rosen started his professional development as a sports business administrator. He went to study sports economics at University of Applied Sciences, Schmalkalden in 2009. In November 2010, he became the development performance center manager for TSG 1899 Hoffenheim and became the Leiter Profiffubball in 2013 April. In a short stint, Alexander became the Direktor Profifubbal in October 2013 and is continuing his task in that position.

Alexander can be seen occasionally coming in the television stations including CNN, BBC, Sky Sports and others, giving some interviews related to football and his club. Actual salary and net worth of Alexander Rosen is not known. However, looking at his position and involvement, his salary can be assumed to be not less than five zero figures and his net worth to be in $million.