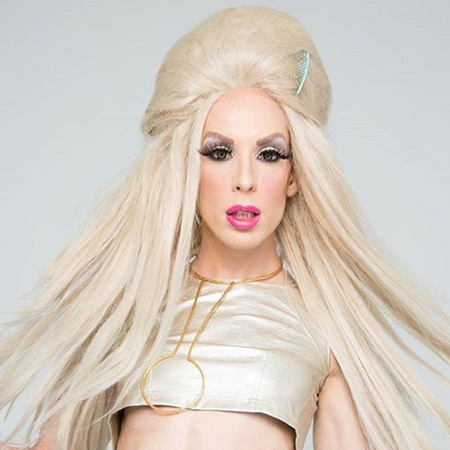 Alaska Thunderfuck is the stage name of Justin Howard, a famous American recording artist, and a drag performer. He is most known for competing in the fifth season of RuPaul’s Drag Race where she was a runner-up. She gained real limelight after she won the second season of  RuPaul's Drag Race All-Stars.

Thunderfuck attended Fort LeBoeuf High School and then joined the University of Pittsburgh where he studied Theater.  He has a half-brother named Cory Binney. Along with Cory, Thunderfuck starred in a World of Wonder web series, Bro’Laska. He has got an older sister named Brooke and a younger brother named Ryan.

The skilled recording artist is the drag daughter of Jer Ber Jones. His father Jones is noted for pioneering animal drag which is originated in Los Angeles. His drag name is derived from Alaskan Thunderfuck, a strain of marijuana.

The talented drag race performer Alaska Thunderfuck started her career in the field of acting after she moved to Los Angeles. But she was not satisfied with the auditioning process, so she turned down drag and started working at the West Hollywood club, Fubar.

Thunderfuck subsequently performed in the Trannyshacks shows in Los Angeles. Along with Tammie Brown and Jer Ber Jones, she made her performance in Palm Springs Gay Pride in the year 2009. At the end of the same year, she met her future boyfriend American drag performer Sharon Needles through the social networking website Myspace.

Thunderfuck formed a band, Haus of Haunt along with Needles and Cherri Bau. The group later evolved into a drag troupe based out on the bar, the Blue Moon. Bering a part of the Haus of Haunt, she likewise helped to present the Pittsburgh debut of the fellow drag queen and the recording artist, Christeene Vale.

Christine Vale was impersonated by Thunderfuck for a music video, RuPaulogize by William Belli. She came gained international stardom after she competed on the fifth season of RuPaul's Drag Race, under the mononym Alaska.

Thunderfuck was auditioned for every season of the show winning the fragrance commercial-themed main challenge in the episode Scent of a Drag Queen. It was announced in 2013 at the season finale that Alaska became a runner-up along with fellow competitor Roxxxy Andrews whereas Kinkx Monsoon became the winner of the season.

In October 2013, Alaska appeared in Woodlawn Theatre's production on The Rocky Horror Show as  Dr. Frank N. Furter. She also appeared in a number of RuPaul's Drag Race Battle of the Seasons shows like a Stevie Nicks tribute called "Stevie Forever", a holiday show called "Blue Christmas", and a cabaret show called "Red for Filth".

Alaska performed in a stage production of Sex and the City, in the summer of 2014. The following year,  she released her debut album under the title Anus which gained positive reviews. And she also released singles from the album like Hieeee and This is My Hair.

For the second season of RuPaul's Drag Race All-Stars Alaska came back to Drag Race in 2016. Despite became the subject of several headlines due to some of her choices of eliminations and her behavior, she was crowned the second winner of All-Stars in the season finale.

Alaska released her second album titled Poundcake, on 14 October 2016.  Singles from the album included The T, Stun, and Puppet. She also competed in the debut season of VH1's Scared Famous. The series was aired on 23 October 2017 on VH1.

The American drag performer Alaska Thunderfuck has earned a tremendous amount of money from her illustrious career. The exact amount of her net worth is still under review but according to some online sources, her net worth is believed to be more than $1 million.

Alaska competed for the second season of RuPaul's Drag Race All-Stars in 2016 and won the competition. And as a winner,  she received a one-year supply of Anastasia Beverly Hills cosmetics and a cash prize of $100,000.

Alaska stands at the height of 5ft 8 inches.

Thunderfuck is yet to be married. She was previously in a relationship with her boyfriend, fellow drag queen Sharon Needles. The royal drag queen couple of “RuPaul’s Drag Race first met via Myspace in 2009 and then she moved back to Pittsburgh to live with him in 2010.

The two also previously collaborated on several projects. Despite their loving relationship, the couple separated after four-year of dating.