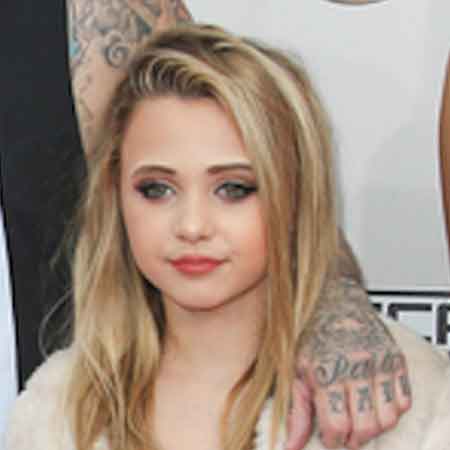 Alabama Luella Barker is an Instagram model, singer, and a reality star. Being the only daughter of famous drummer father Travis Barker and former Miss USA mother Shanna Moakler, Alabama was born with a silver spoon in her mouth. She made her screen debut right after she was born during the final season of Meet the Barkers. She is also famous for her song "Heartbreaker".

Alabama Luella Barker was born on December 24, 2005, in California under the zodiac sign Capricorn. She was born during the second and final season of Meet the Barkers series and was introduced in the show's finale.

Her father Travis Barker is a drummer and musician of Blink-182 and her mother Shanna Moakler, is a model and former Miss USA. She also has a brother Landon Barker and an older step-sister Atiana Cecelia De La Hoya. Her parents got divorced in 2006 when she was a year old.

Her old man Travis Barker was born in Fontana, California on November 14, 1975, an American musician, songwriter, and record producer, and best known for the rock band Blink-182. He has been married twice. His relationship with his first wife Melissa Kennedy lasted for only nine months.

Similarly, Alabama's Mother Shanna Moakler is a former model who was Miss New York and runner-up Miss USA in 1995. After marrying Travis Baker she came to the limelight. She even played roles in films "Wedding Singer" and "Big Momma's House 2". She got married in 2004 with Barker and divorced in 2008.

She was also married to a boxer Oscar De La Hoya in 1999, she has a daughter named Atiana.

Alabama was born in the family of famous people, so it was never a struggle for her to come into the limelight. She became famous after she was introduced in the television series "Meet The Barkers" by her father.

Alabama wants to be a singer and actor when she grows up and just like her mom, she is also interested in modeling. She is also good at playing Piano and Drums.

As a reality star, she must have collected a considerable net worth, but it has not been revealed yet. In October 2017, she released her single " Our House" and is planning to release her another song HeartBreaker.

She even earns by supporting the brands including "Famous Stars and Straps" and "CoverGirl" on her Instagram.

Alabama is living a luxurious lifestyle as her mom has the net worth of $15 million where his dad Travis Barker has $45 million net worth.

Alabama is young and very focused on her dream to become a singer and actress. Alabama is 12 years old as of 2018 and is too young to be in a relationship.

She is active on Instagram with 300k followers and 3361 followers on her Twitter as of December 2018. Her social media is handled by her parents.

A post shared by Alabama Luella Barker (@alabamaluellabarker) on Dec 3, 2018 at 4:05pm PST

She is a young and rising star who is on the path to become just like her parents.