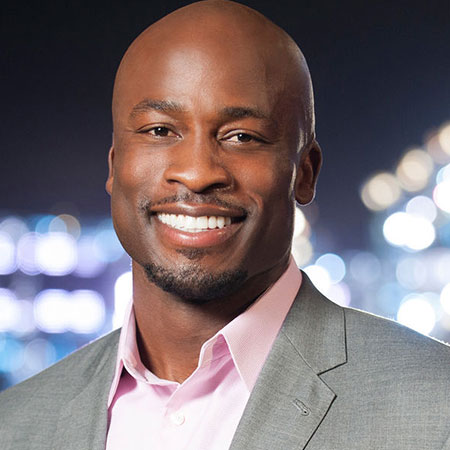 The former professional American football player, Akbar Gbajabiamila is popular for his NFL career as well as his career as a television personality, sports commentator and entertainment host. He also co-hosted popular shows like American Ninja Warrior, The Night Shift, and Yemi's Dilemma.

In 2003, Akbar was signed by the Oakland Raiders as an undrafted free agent. After playing with Raiders for three seasons, Akbar transferred to San Diego Chargers in 2006 where he played for a season before he moved to Miami Dolphins. In 2008, he moved back to Raider and was released to retire as a Raider.

In 2005, Gbaja was elected as one of the first NFL athletes into their Broadcast Boot Camp. Before entering the NFL Network, and CBS Sports, he worked as an analyst for Mtn Network and CBS Sports Network for two years.

Besides, he made his acting debut in the sort movie The Sac Fly in 2015. Also, he was a fan-favorite on the 2009 ABC adventure series Expedition Impossible.

#TBT to hours & hours of Ninja training with @kevin_the_bull brotha, thanks for the support, blisters on blisters, super sore forearms, helping me find muscles I never knew I had, and for helping me accomplish my dream of competing on @ninjawarrior. . . . . . . . . #ninjawarrior #americanninjawarrior #anw #ninja #strengthtraining #fitness #parkour #rockclimbing #training @nbc @anwnation #extreme #lifting #Thursday #transformation

Currently, he serves as a member of the board for the Asomugha Foundation. He also serves on the board of the Michael J. Fox Foundation, which raises funds for Parkinson's research purpose. He recently co-hosted American Ninja Warrior together with Matt Iseman and Zuri Hall.

The American Ninja Warrior host has an estimated net worth of $7 million as of 2019. Gbaja has earned a lucrative sum of money from his hard work and dedication to his career as an NFL player.

To add to this, he also earns $860,000 per year from his job at the NFL American football player. Similarly, his net worth is comparable to another American athlete Michael Johnson ($7 million).

Akbar is happily married to Chrystal Gbaja-Biamila. However, their wedding date is not revealed to the media.

As of now, the Akbar and his spouse are living a blissful married life with their children. They reside in California along.

For more updates on your favorite celebrity, follow Articlebio