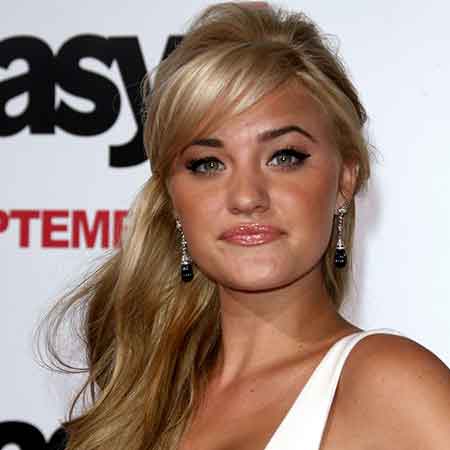 Amanda Joy Michalka is an American singer, songwriter, musician, and actress who is well known for being one half of the musical group called "78 Violets." AJ Michalka even owns a contracting company. She has got BTVA People's Choice Voice Acting Award.

She was born under zodiac sign Aries which describes her as Enterprising, Spontaneous, Daring, and Energetic.

Her father Mark owns a contracting company and mother Carrie is a musician. Her parents divorced while she was a child. She is a younger sister of actress Aly Michalka. Michalka and her older sister moved to Seattle, Washington with her parents and grew up in Seattle and Milwaukee.

Her sister Alyson is also an actress and musician. The sister duo attended Mack Elementary School where AJ was also homeschooled for part of her childhood. She was interested in music from her early childhood; she started playing piano since she was six and subsequently started playing guitar. Moreover, she had started acting when she was just five.

Michalka began her modeling career as a model for catalogs. In March 2006, she made her debut on Disney Channel in Disney Channel Orginal Movie Cow Belles alongside her sister Aly. She played a role of Courtney Callum and her sister worked as Taylor Callum. Later on, she appeared on many television shows such as Oliver Beene, Six Feet Under, The Guardian, and General Hospital.

She was featured in Peter Jackson's 2009 movie The Lovely Bones which was released on January 15, 2010.

Michalka is skilled in playing several musical instruments such as guitar, piano, and bongos. She started playing piano since she was four years old and started playing guitar in her early teen. She performed in a number of WORLD Music Productions shows at a church near her home in Southern California when she was a child.

Michalka and her sister Aly performed as the musical duo 78 Violet in 2013 but in 2015, they decided to change their name back to ALY and AJ. In 2010, Michalka recorded the theme song for Secretariat entitled It's Who We Are and the video was released along with the single.

Aj and her sister Aly have released 6 albums together; Into the Rush, Insomniatic, Acoustic Hearts of Winter, DisneyMania 3 in concert, Ten years and 'Ten Years(Deluxe). Besides, Michalka released 4 solo albums; Secretariat, Grave unplugged, Steven Universe, Vol.1 and The Goldbergs Mixtape.

Michalka has been cast in a recurring role of Lainey Lewis on the ABC sitcom, The Goldberg's since 2013. Michalka and her sister ALY played an untitled drama film together in Laurel Canyon, California which was directed by Aly's husband, Stephen Ringer. The film was later named Weepah Way for Now.

She has played many television series, movies as well as she has appeared in guest roles in several TV shows. The Lovely Bones, Slow Moe, Support the Girls and Dirty Lies are some of the movies she played. Besides, Pa s sions, Birds of Prey, General Hospital, The Guardian are some of the series she did in her career.

AJ Michalka has earned several award nominations for her contributions in music industry as well as for her role in the television series. Here are some of her awards and nominations:

Singer and actress Michalka's net worth is not revealed, but as she has a glorious career in both music and acting, we can a s sume that she has a pretty good net worth which is estimated to be around $700k in 2018.

She has also worked on some Box Office hit movies which are:

She was in a relationship with Ryan Blair an American entrepreneur and author which they started dating in 2010. They had a good relationship but looks like they were not meant to be together so their relationship broke up in 2011. They haven't revealed the reason behind their separation yet.

Michalka's was with Patrick Schwarzenegger which they started dating in 2012 after they meet each other in an event. After a year they called off their relationship which the exact reason behind it has not been revealed.

In 2014, she dated Keenan Tracey; they dated for a brief amount of time before parting their ways.

"Let's get lunch in Barcelona" #throwback

As of 2018, the singer and actress Michalka might be dating a new boyfriend. None of them yet talked about their relationship in the media, however, we can see her photographs with the new mystery man on her Instagram. In one post, she can be seen having lunch with her new rumored boyfriend.