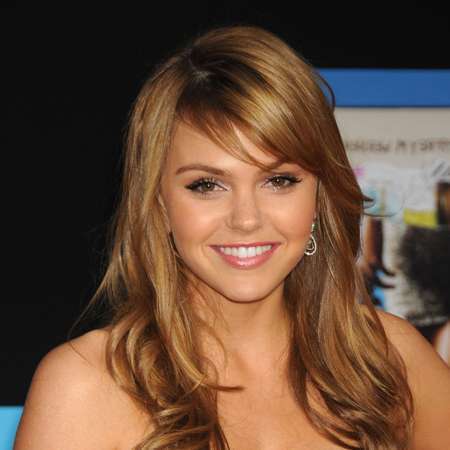 Aimee Teegarden is an American actress, producer, and model born on October 10, 1989. Information related to her childhood, parents and family are not made clear on the internet; however; there is little suggestion that she has a younger sister.

Aimee Teegarden completed her high school through independent study when she was at the age of 16. Before acting, she started her career as a model. Aimee has modeled for several campaigns including Old Navy, Hollister, Alltel, YMI Jeans, and Tommy Hilfiger and has also made few television appearances in the popular TV shows like including Disney Channel’s Hannah Montana.

Aimee Teegarden joined the cast member of NBC drama Friday on October 3,  2006 Night Lights, as Julie Taylor, and appeared in all five series of the show. The show was immensely popular and so was ther actress.as her character as Taylor was highly appreciated by the fans. Teegarden was starred in three episodes of the CW’s 90210 as Rhonda and along with that she also appeared on Legend of the Seeker and in an episode of CSI: Crime Scene Investigation and CSI: Miami.

Aimee Teegarden portrayed a character of horror lover in the slaseher film Scream, in the yar 2011. Her outstanding performance in Friday Night Lights made her TV Actress of the Year by Young Hollywood Awards in May 2011. She also signed on to work in the war drama Love and Honor in June 2011. In the year 2015, Aimee signed on to co-star in F.Javier Guitierrez’s horror movie Rings. Now, she is working in several big budget high profile Hollywood projects.

Aimee Teegarden doesn’t disclose her personal relationship to the media world. Talking about her dating life, she is not married yet and also her current relationship status is not made clear by her. However, previously there were rumors that she was having an affair with her Friday Night Lights co-star Zach Gilford. Both of them met on the set of the show and fell in love but they are no longer together. Apart from this, there is no news of her being in a relationship with anyone.

Aimee Teegarden's charismatic personality has always been her USP to attract people towards her. The energetic and young actress with an amazing career ahead of her makes a good salary from her work. Currently, her net worth is estimated at $3 million; which is considered a huge sum in her early phase of career.