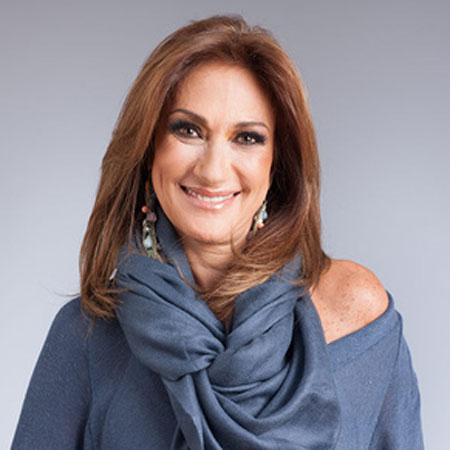 Adela Micha is a Mexican journalist known best for pioneering in the Mexican reality television show Big Brother. Besides, she is noticed for her contribution in several radio and TV newscasts. Adela Micha is one of the recognized names in Mexican media journalism.

Adela Micha was born as Adela Micha Zaga on May 25, 1963, to Mexican parents in Mexico City, Distrito Federal, Mexico. She is a Mexican citizen and is Jewish. She has a sister named  Elías Micha Zaga.

Regarding education, she attended Universidad del Nuevo Mundo in Mexico which, now is closed by SEP and also graduated from the Popular Autonomous University of Veracruz.

Fluent in Spanish, English, and French, Adela Mich has interviewed a number of high profile personalities including Bill Clinton, Vincent Fox, Shakira, U2, Julia Roberts, Richard Gere, Salma Hayek, and many others. She has traveled across the United States and Asia covering the top stories. She is the author of a book titled 'Gritos y susurros' (Screams and Whispers) based on 36 outstanding women in Mexico.

Adela Micha has earned a considerable amount of wage for appearing in a popular reality television show 'Big Brother' and several other programs. Not only money, but she has also gained a lot of success through her performance and service in different programs and shows. But she has not preferred to share the exact worth she collects from her entire career. Some of the sources have claimed it to be $1 million.

The 56 years old, Adela Micha has not disclosed her personal information. Her relationship status is also a mystery. She was once married to her husband with whom she has two children, a son named Carlos Gotlib Micha and a daughter named Theresa Micha.

Adela Micha lives with her children. Her current relationship status is a s sumed to be single. Her past affairs/ boyfriends are completely hidden.

Adela Micha is available on Twitter, Facebook, and Instagram. She has a huge amount of followers on her Twitter account where she is active with the handle @Adela_Micha. She can be subscribed to her YouTube channel as well. Besides, her biography on Wikipedia and different other internet sites is also helpful to learn about her. She has her own website as well, www.adelamicha.com.