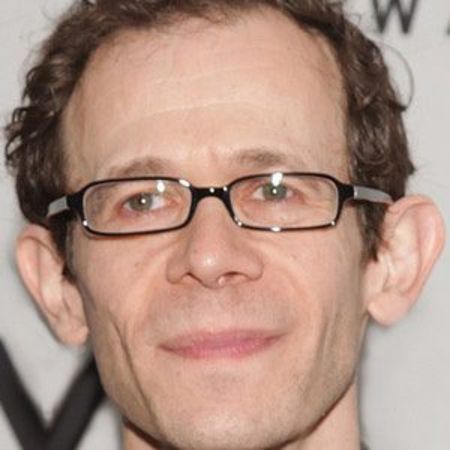 Adam Godley is an English actor who was once nominated for a Tony Award. He has also been nominated for the Olivier Award three times. He has appeared in numerous hit movies such as Battleship and Around the World in 80 Days.

Adam Godley was born on July 22, 1964, in Amersham, the United Kingdom, to a solicitor father and magistrate mother, under the birth sign Cancer.

He was born in a Jewish family and was raised along with his younger brother Raymond Godley in Watford, Hertfordshire.

Godley is of English nationality and belongs to Caucasian ethnicity. He studied at Rickmansworth Secondary School.

Adam Godley started his acting career at the age of 9; he worked in a BBC radio production of Hemingway's My Old Man.

He performed on the stage for the first time when he was 11 years old; he portrayed Prince Giovanni in The White Devil at The Old Vic.

In his early career, Godley worked at the National Theatre in Lillian Helman's Watch on the Rhine, and Harold Pinter's Close of Play.

He rose to fame after playing the lead role of John Trenchard in the 1984 BBC TV mini-series of J. Meade Falkner's Moonfleet.

He has played Jack Worthing in the West End production of The Importance of Being Earnest and Victor. In 2001, he performed in Broadway production of Noël Coward's Private Lives.

Throughout his career, Godley has nominated for the Olivier Award three times and a Tony Award.

A Total Net Worth of $4 Million

Being one of the most successful theatre and television actor, Adam Godley has added a decent amount of money from his acting career.

According to the Superb Hub website, Godley has an estimated net worth of $4 million. He owns a luxurious house in Los Angeles.

The exact salary of the Tony Award nominee has not been disclosed. However, according to work.chron.com, a theatre actor in the United Kingdom earns a minimum of $2,034 per week.

Moving towards the relationship status of Adam Godley, the 55-year-old actor seems to be single right now. However, he was briefly married to actress Alex Belcourt who has appeared in Midsomer Murders (1997), The Brief (2004) and Skyland (2005).

It's unknown when the couple tied the knot but sources have confirmed that the two got a divorce in 2004. Godley currently lives in Los Angeles with his writing partner, Jon Hartmere.