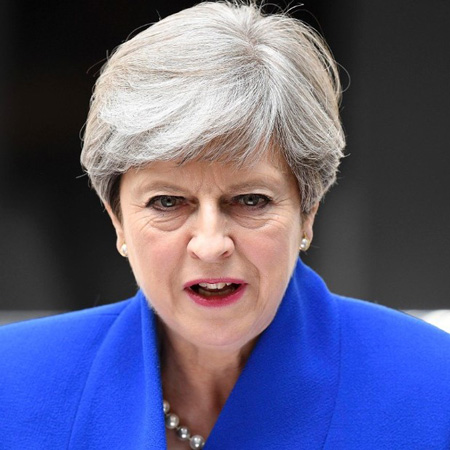 Theresa May is a British politician who has worked as a Prime Minister of the United Kingdom. She has been serving as a leader of the Conservative Party since 2016. She was the second women to hold the position of the prime minister after Margaret Thatcher.

May was born on 1 October 1956 in England, UK. She holds an English nationality and regarding her ethnicity she is Caucasian. She is the daughter of Zaidee Mary and Hubert Brasier. She was the only child of her parents.

May's father died in a car accident in 1981. Her mother suffered from multiple sclerosis the following year. Her mother was a strong supporter of the conservative party and her father was a priest of the Church of England.

May attended the Catholic School and won a place at the former Holton Park Girls’ Grammar School. She then joined the University of Oxford and studied geography. She completed her graduation with a second class BA degree at the St.Hugh’s College.

In 1986, May made her first appearance in politics and worked as a counselor for the London Borough of Merton. She stood for the general election and was unsuccessful, as her target was to win the 1994 Barking by-election.

May has also been the member of the parliament for Maidenhead. She was selected as the Conservative candidate for Maidenhead, ahead of the 1997 general election. She has identified herself as a one-nation conservative, a form of British conservatism which views society as organic and gives priority for pragmatism and paternalism.

May was appointed as the Home Secretary and Minister for Women and Equity by Prime Minister David Cameron. Currently, she is the prime minister of the United Kingdom and serves as a leader of the conservative party.

May expressed her great support for the introduction of same-sex marriage by recording a video for the OUT$Marriage campaign in May 2012.

In the video, she stated, "I believe if two people care for each other, if they love each other if they want to commit to each other... then they should be able to get married and marriage should be for everyone".

May, 61, is married but has no children yet. She married to Philip May, an investment banker. The couple tied their knot in September 1980. Their wedding took place in The Church of St. Mary the Virgin, Wheatley. Her husband is currently employed by Capital International.

The couple was introduced by the former prime minister of Pakistan, Benazir Bhutto at Oxford. They have no children yet. She has expressed regret for not being able to have children.

May is the member of the Church of England and goes to the church every Sunday. She loves fashion and has a keen interest in distinctive shoes. She wore leopard-printed shoes at her 'Nasty Party" speech in 2002. She chose a subscription to Vogue as her luxury item on Desert Islad Discs in 2014.

May was diagnosed with diabetes mellitus of type 1 in November 2012. She is treated with daily insulin injections.

The 61-year-old, politician is living a luxurious life with her husband. She earned a great amount of salary serving as prime minister of UK. As the Prime Minister in the UK are paid around $189k, she has also made a great amount of money giving better services to the public.