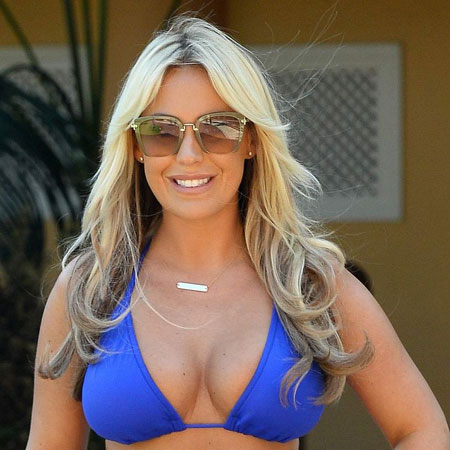 The reality TV star turned businesswoman as well as popular TOWIE star, Kate Wright, quit TOWIE to focus on her swimwear range. She is no stranger to showing off her enviable, curvaceous figure on social media.

Wright used to work as a business support manager for a big team in a bank before gaining reality TV fame.

Kate Wright was born on June 3, 1991, in Essex, England. She belongs to white ethnicity and holds a British nationality. She grew up with her siblings, Jessica Wright and Mark Wright.

Wright joined the cast of 'The Only Way is Essex' with Mike Hassini in 2015. Her first appearance on screen was during the Marbella special when she strode out in a bikini.

Wright also has a fashion range with online retailer Miss Pap and launched her ‘Party Picks’ collection in Christmas 2016.

Kate Wright is in a relationship with English former professional footballer, Rio Ferdinand who is currently television pundit of BT Sport, played as a centre-back. The couple first met in Dubai.

The duo spends such a beautiful moment at the upscale sushi restaurant Roka in Canary Wharf. They confirmed their romance in the media when they were spotted enjoying a date in July 2017.

Previously, Wright dated reality star from Essex, Dan Edgar who is currently featured on ITV's The Only Way Is Essex.

The pair first met in 2010 while on holiday in Ibiza and began dating. However, after being for three years together, they ended their relationship.

The couple again reunited when Dan proposed her during the last Christmas at Danielle Armstrong’s shop by standing in front of the window to express his love. Despite this all, the duo again failed to handle their relationship and ended their love affair.

Wright is also a fitness freak and goes to the gym five days a week to maintain her toned physique.

Kate Wright has earned a fame from the entertainment industry. She has earned an enormous amount of salary from her career however her current net worth has not disclosed yet.?