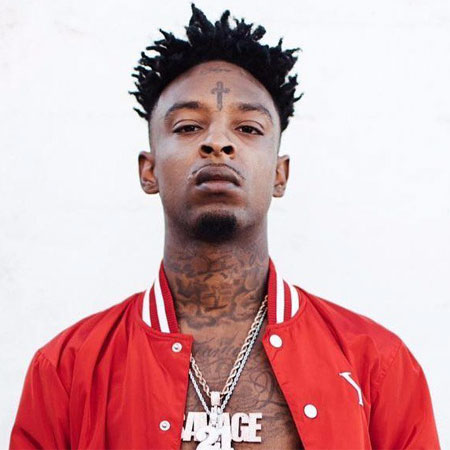 Shayaa Bin Abraham-Joseph is famous as 21 Savage,  and an Atlanta-based rapper. He is well known for his mixtapes, Slaughter King and The Slaughter Tape. In July 2017, he released his first studio album titled Issa Album.

Born on October 22, 1992, in Atlanta, Georgia, U.S. 21 Savage was raised by his mother, Heather. He was born to a Haitian father who a former crack dealer and a Dominican mother. He has four brothers and six sisters. Savage belongs to American nationality and ethnicity wise; Savage is of mixed ethnical background.

Savage’s early life wasn’t good as he spent his early years on the rough streets of the town and his life had been defined by violence and crime. While in 7th grade, he was expelled from Stone Mountain Middle School due to a gun possession.

Eventually, Savage’s mother put him into a school in Gwinnett County, after he was kicked out of every school in Dekalb County. There he thrived for the first few months and participated in their football program where he played both as wide receiver and as a cornerback.

However, Savage then left the school and went back to his street life. After that, he began robbing in the town with his friends.

Savage and his friends also took the number 21 for their gang name, and he tattooed it on the side of his face when he was 16. He was arrested numerous time for his illegal activities including once with 89 hydrocodone pills, 22 grams of marijuana, and a Glock .40 as well.

Savage was shot six times in 2013, on his 21st birthday and his best friend was also killed in the incident. He also lost his brother named Tayman in the same year.

Tired of spending his life as a thug on the streets, Savage made up his mind to move further and involve in anti-criminal activities. He kicked off his music career with the crew Slaughtergang; MC 21 Savage hit as a solo artist with his debut single ‘Picky’ on November 12, 2014. He and fellow Atlanta rapper Lotto Savage formed Slaughtergang and made his debut mixtape, The Slaughter Tape, launched on May 25, 2015.

Savage launched a collaborative EP, Free Guwop along with an American record recorder and rapper Sonny Digital, on July 2, 2015. He then launched his second mixtape, Slaughter King, on December 1, 2015. His debut studio album Issa also got listed at number 2 on the US Billboard 200 chart.

The American rapper and songwriter, 21 Savage, 25, is yet to be married. However, according to him, he was already a father of two children at the age of 19. But, he has never shared the name of kids and their mother’s name.

The rapper Savage is currently dating model, Amber Rose since 2017. According to MC, he also said, “that’s my girl, fo’ sho.” On October 1, Savage made a show of support for his girlfriend Rose at the annual SluWalk in Los Angeles.

In September 2017, Savage was also seen wearing a $50K promise king from his girlfriend Amber and said she wants to marry him. It seems the couple is planning to get married.

21 Savage has earned a hefty amount of money from his music career. As an American rapper and songwriter, Savage has an estimated a net worth of around $6 million in 2017. He is 6 feet tall.