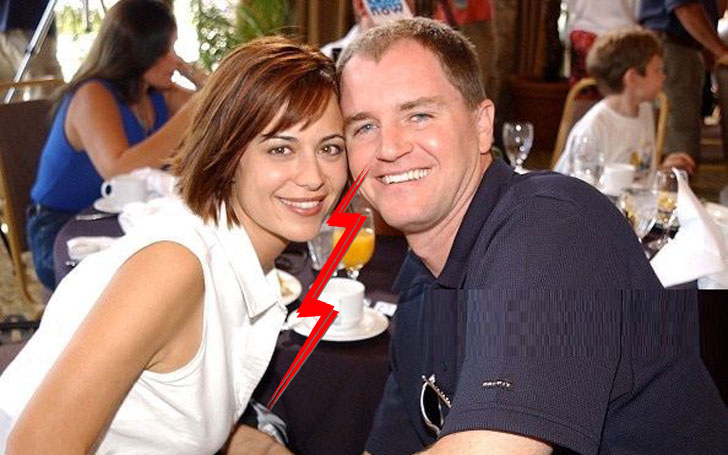 With appearances in JAG and Army Wives, the American actress Catherine Bell indeed is inclining the way to wide exposure & career success. But seems the Hollywood celebrity has faced a bit of bitterness in a love relationship though, as she divorced her husband of 17 years Adam Beason in 2012.

In the celebrity world, marriage & divorce, without a doubt, have been a common issue but the reason for the celeb-couple split always hit the limelight, especially when it turns out something catchy that's not far from the allegation on Catherine-Adam divorce.

So, why did Catherine & Adam Beason divorce? Is 'The Good Witch' star dating currently?

Some relationships are not meant for a lifetime seems the same fate came up with the parents of 2 & Hollywood actress-actor Catherine Bell and Adam Beason. The now-former couple was married for 17 years before they split in September 2011 and divorced in 2012.

The B-Ring actor Adam met Catherine on the sets of the 1992 film Death Becomes Her when Bell appeared as the body double to Isabella Rossellini in the movie. After dating for 2 years, they exchanged vows on May 8, 1994, in a private wedding ceremony.

Moreover, while together, Catherine & Adam welcomed 2 children together: daughter Gemma (April 16, 2003) and son Ronan (August 21, 2010). The family of 5 lived in Calabasas, California, which they sold 2 years prior to their divorce in 2012.

Meanwhile, as of January 2020, their daughter Gemma is 16 years old while Ronan is 9 years old.

They remain great friends. They’re committed to raising their two children together.

The rep also said that Bell and Beason will together work in their production company, DaVinci Films, and are excited about the project.

Despite such a highlighted divorce, Catherine & Adam never opened up clearly about the reason for their divorce. Some sources stated irreconcilable differences while some questioned the sexual preference (allegedly lesbian) of Catherine Bell to be the reason.

Because shortly after the divorce, the Home for Christmas Day actress was living with Scientologist, photographer, and party planner Brooke Daniells in Los Angeles, it led to many rumors linking her divorce & stay with Brooke Danielles. However, no other official statement of her relationship with Daniells besides friendship came up.

A friend in need is a friend indeed!

Relationship Update: Is She Dating Currently?

Ever since Catherine & Adam divorced, none of them ever made publically disclosed relationships or any dating issues. Even after 7 years of split, Catherine Bell seems not to be dating; no report on her boyfriend is out & never made any confirmation of her dating over the years.

The 51-year-old actress seems busy with her career as well as managing to raise her children. An avid user of Instagram & Twitter, Bell has over 158K followers & 82K followers respectively as of January 2020, where she often shares snaps of her work and children as well.

Catherine Bell started her acting career from sitcom Sugar and Spice in 1990. Bell who quit her study to become a model in Japan did many commercials at the beginning of her career, one of the many commercials she has done is for Amex.

She became popular in Hollywood after her role in JAG from 1996 to 2005. She also appeared in the role of Denise Sherwood in Army Wives (2007- 2013). Since 2015, Bell appears in the comedy-drama TV series Good Witch as co-leading role Cassandra "Cassie" Nightingale, after appearing in all 7 Good Witch TV films (consecutively from 2008 to 2014).

She also appeared in the hit movie, Bruce Almighty (2003), where she shared the screen with famous stars which include Jim Carrey, Jennifer Aniston, and Lisa Ann Walter. In 2017, Catherine appeared in the 2017 Hallmark films Home for Christmas Day starring Victor Webster and Matreya Fedor.