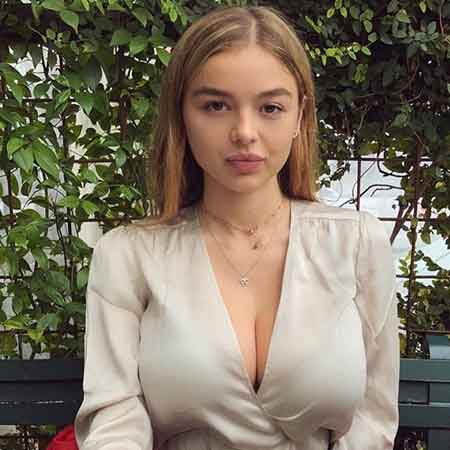 Sophie Mudd is an internet personality who came into the limelight after she started posting steamy pictures and videos of herself wearing next to nothing on her Instagram and Snapchat accounts. She first posted a photo on Instagram in November 2013 and as of 2019, she has 1.4 million followers. She was highly criticized for publicizing nudity at such a young age. Talking about her personal life, Mudd has been dating Austin Dash for a quite long.

Sophie Mudd was born on 27 July 1998 in the United States of America, under the birth sign Cancer. She has a brother named Nicolas Mudd. Apart from this, there is no information about her early life including education and family. She was raised up in the U.S.

Mudd holds American nationality and regarding her ethnicity, she is White.

Sophie Mudd started her Instagram page in November 2013 and started posting her pictures there. Her first Instagram post was her photo taken at The Sparkle Factory in Los Angeles. In less than five years, she gained more than 1.3 million followers on her photo and short video sharing site Instagram. She uses the platform as a daily-life feed.

Mudd mostly posts pictures in the bikini flaunting her amazing figure. Sometimes she also posts videos where she is almost dressed in nothing. In fact, it can be said that she uses social media as a platform for becoming famous.

Mudd became popular on the internet within a short time. Even more, FHM magazine predicted that she might be the next Emily Ratajkowski, a famous American model and actress who is best known for showing her bold and personality on social media.

The social media star has also worked for many top brands as well as companies.

How Much Is Sophie Mudd's Net Worth?

Sophie Mudd is a successful Instagram model who amassed a mega fan following on her account within years. She has posted a number of photos sponsoring several brands that she endorses. And as per several online sources, an Instagram personality who has over 100K followers can command $5,000 for a post made in partnership with a company or brand.

Mudd's exact amount of net worth is yet to be revealed but as per some sources, is believed to be more than $400K.

Sophie Mudd is yet to be married as of 2019 but she is dating fellow Instagram star Austin Dash. The couple is quite open about their relationship but she has not even posted one picture along with her boyfriend on her respective Instagram account.

As per the reports, they started their affair in late 2017. It was reported that the two first met in early 2017 and started dating after some courtship.

Along with her boyfriend, she often posts cozy photos on her Instagram account. She has frequently been seen hanging out with Conard Hilton's son Conrad Hilton Jr. Many of her fans also wondered if there was going something between her and Hilton Jr. Besides Instagram, Mudd is also active on other social networking sites which include Facebook, Twitter, and Snapchat. The couple seems much in love but has yet to give any hint about their marriage plan.

Mudd prefers to travel for tourism. She is also an avid animal lover who has a pet puppy. It has also been reported that she has had breast surgery.