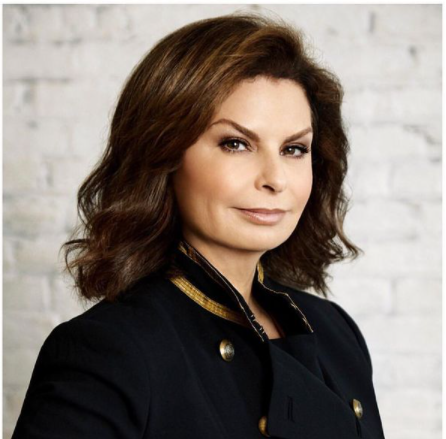 Nabila Khashoggi is a famous American actress, businesswoman, and author. She stepped into the entertainment industry with the uncredited role of Comparsa in the movie Young Toscanini. She is known for her performance in Eye of the Widow, The Mystery of Edwin Drood, and Labyrinth.

Where Was Nabila Khashoggi Born?

Her parents are Adnan Khashoggi (father) and Soraya Khashoggi (mother). She was raised alongside her 5 siblings; brothers Ali, Hussein, Omar, Khalid, Mohammed, and a sister, Petrina Khashoggi.

She graduated from Millfield School, England. She was trained in some acting lessons by famous actress Joanne Baron in Los Angels.

Nabila started her career as an entrepreneur. Being the daughter of a Saudi businessman, she also pursued her career in business. In 1983, she and her friend Bedros Bedrossian founded Infolex Corp, which provided information about famous places, hotels, and shopping areas to travelers.

The 59-year-old got into a real business and started working with her brothers in real estate following that year. She traveled around the world, building projects in the sector of tourism and hospitality. Later in 2010, she owned an e-site, Nabila K, promoting and selling cosmetics and household products.

CAPTION: Nabila Khashoggi's net worth is estimated at around $500,000 SOURCE: Instagram @nabila_khashoggi

Moving towards her entertainment career, Beirut native stepped into the acting with the movie Young Toscanini. She got her breakthrough from the movie Eye of the Widow and made an impact on Hollywood. Later in 1993, she portrayed Sapsea's maid's character in the movie The Mystery of Edwin Drood.

Her latest credits towards the industry include Beverly Hill, Labyrinth, and Perfume. So far, she has shared her screen alongside Mariel Hemingway, Leslie Mann, and Paul Sorvino. Besides that, she is the writer of the kids' series of books titled Spartan and the Green Egg, a trip to the Rainforest.

Being born in a wealthy family, Nabila lives a luxurious lifestyle without a doubt. Currently, her exact fortune is under review; however, she is reported to have an estimated net worth of $500,000.

Her primary source of income is through her career as a businesswoman and some parts of acting. In 1983, she founded Infolex Corp and owned an e-site, Nabilak.com, promoting and selling beauty products. Also, she funds some part of her earnings in helping and supporting poor children through an Italian charity, Children for Peace ONLUS.

On the other hand, her father, Adnan Khashoggi, an arms dealer and businessman, was a billionaire and had an estimated net worth of $4 billion. According to some sources, her father owned a yacht named under her daughter titled Nabila.

Later in 1988, Adnan ran into some financial problems and sold that yacht to the Sultan of Brunei, later owned by Donald Trump with $29 million. Similarly, her husband, James Cox Chamber, has an estimated net worth of $6 billion. Cox holds 16.3% of the share in Cox Enterprise, owned by the Cox family.

Nabila Khashoggi is married to Cox Chambers (American billionaire actor and dancer). The couple walked down the aisle in 2004 in an intimate wedding ceremony. Together, they are blessed with a child named Layth Chambers.

Previously, Eye of the Widow actress was married to Danny Daggenhurst, a palm oil company chairman. The duo tied the knot in 1992 and, unfortunately, got a divorce in 1998. The pair has a son named Spartan Daggenhurst, born on January 1, 1993.